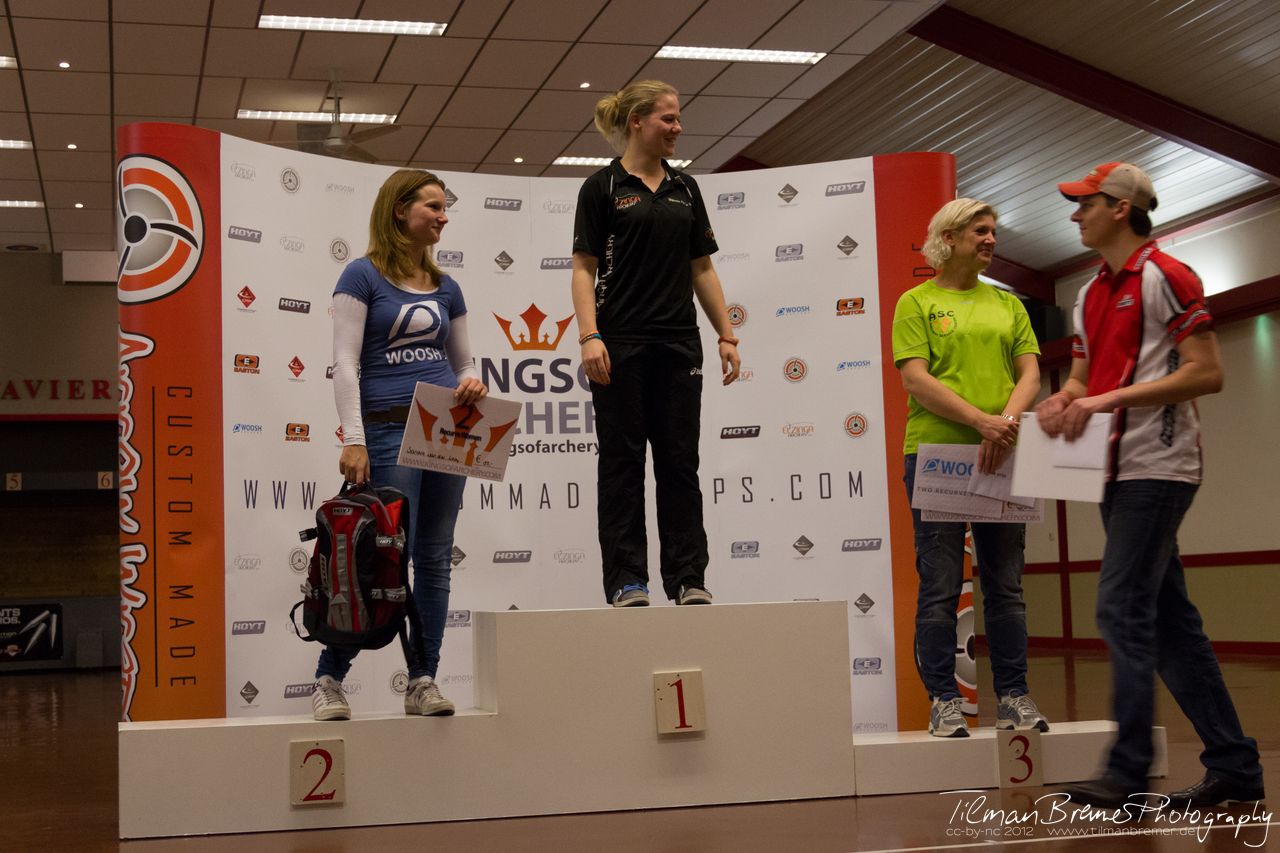 This article is intended to be a nomination for the „Handboog Award 2013“ in the category „Handboogevenement van het Jaar“ of the Dutch Archery Federation (Nederlandse Handboog Bond – NHB). Find more information about the Handboog Award on the NHB website: http://www.handboogsport.nl/nieuws/13/handboogcongres/handboog-awards-2013/

In the German language, there is a term called „Herzblut“. If you put Herzblut in something, you put all your energy in something you believe in, you devote yourself, you sacrifice, you do everything to make it happen. „Herzblut“ is what comes to my mind when I think of the Dutch „Kings Of Archery Tournament“ I visited last November, there was lots of it in it.

First of all, Kings Of Archery is more of less an ordinary indoor tournament, but the details are what makes it really different. Dutch compound archer and national team member Sander Doldermann is one of the organizers of this event and is responsible for the online presence through their website, youtube and social media. This is the first remarkable fact about Kings Of Archery (or KoA): The archery community, local clubs and even the national associations and the World Archery Association are quite frankly not at the cutting edge when it comes to online presence. Live online results have become a standard at international competitions but still aren’t at some national events and you still don’t expect them as a standard at regional events. Coverage via social media, facebook & twitter, live pictures or even live streams developed to a total „must have“ in some sports, in archery it’s still sort of exotic. KoA was an event that refreshingly broke with this standards and provided great online coverage weeks before, during and after the event. Kings of Archery has it’s own logo and it’s own state-of-the-art website instead of being just some tournament of some club buried somewhere in an oldschool club’s website. During the event, there were live results available via IANSEO, a lot of coverage happened via social media, a professional video of the event was produced and published on youtube shortly after the event as well a highlights-video of the „Nerves of Steel Shoot“ that took place as addition to the regular tournament in the evening. All in all, I felt like I have been to a much bigger tournament, just because of the professional level of appearance and coverage that was made possible by the organizers.

Another unusual thing is the event’s format. The archers shoot 3 rounds of 30 arrows on 18m. They shoot on regular faces but they score unusual, counting the recurve 10 as a 10 for compound, too, and the recurve archers were able to score the whole yellow zone as 10, so that there is in fact no 9 for them. The finals are shot in a last-man-standing format instead of elimination rounds in a set system. So far, this is the competition format that is used in Las Vegas for the World Archery Festival, but it might be the only tournament in Europe where this format is used and given the fact a lot of compound archers took part and the venue wasn’t a big sports hall but the club shooting range that looks more like a bar than a sports hall, the tournament had some kind of a „little-Vegas-spirit“. Vegas is pretty far away for the regular guy in Europe, so it was a lot of fun shooting something similar in a nearby location that would not ruing your budget.

Additionally, there was the „Nerves of Steel Shoot“. Never heard of it? I haven’t heard of it before, either. „Nerves of Steel“ was an additional event shot in the evening of the first day of competition. The rules were quite simple: A steel plate with a hole cut in it was placed on top of the target face, and you were supposed to shoot on it. Beginning with a hole the size of the 6-point-ring it was replaced by a plate with a smaller hole every round. If you hit, your arrow was fine, if you missed, it shattered with a big bang and you were out. The one that was able to shoot through the smallest hole without hitting the steel plate was declared the winner and got a new set of arrows (how ironic!). The archers would shoot one by one, with everybody else watching and with dramatic music playing. Every time an arrow smashed on the steel plate you could feel the other archers suffering with the one that just lost an arrow, and the crowd also cheered a lot for everybody who hit, especially when hits got rare in the later rounds. I don’t think I have ever been in a competition more exciting and more fun than the Nerves of Steel Shoot.

The organizers worked together with a lot of well known names in the archery industry, such as Custommadewraps.com, Hoyt, Easton, Woosh Archery Strings and more. Because of this, valuable prizes were given to the winners of each category which was quite unusual for the size of the tournament. Even though, I don’t think it was a bad deal for the sponsors, because the coverage made up for the size of the tournament. The word was out fast via social media and the tournament recieved a lot of attention even though it was just the second time it was organized after what was more or less a test event in 2011.

All in all, the combination of a professional appearance, an interesting format and great prizes to win made Kings of Archery an extraordinary tournament which is second to none. Sander Dolderman and his team are doing the archery community a big favour, other organizers should play copycat and get some of that „Herzblut“.

More of my pictures of the tournament: http://www.tilmanbremer.de/photography/archery/nggallery/archery/kings-of-archery-2012/

In addition, some videos of the 2012 edition: